The past two weeks have seen an absolute glut of Outlander related news, articles, interviews, and images.  Which is soooo different from last season.  Back then we scoured the internet for anything about “our” show and anxiously read what few articles there were, hoping that critics and reviewers liked the series.  We dreamed that the world would find out about the wonderfulness that is Outlander.  It took awhile, but what we hoped would happen did happen.  In fact, there is so much Outlander stuff out here right now that I feel slightly overwhelmed!

The articles I’ve been reading this time around have been absolutely delightful.   They have been meaty, insightful, and VERY complimentary.  For the first time, I feel like the critics “get it”.  And, the outlets that are sitting up, taking notice, and writing about it are getting larger and more numerable.  I’d feel a little sad about the competition for readers except…THERE IS A COMPETITION FOR READERS!  It is everything we fans had hoped would happen for our beloved books and show.  They are getting the attention they deserve.  Despite the “Scotland’s answer to GOT”, “fifty shades of plaid”, “bodice-ripper’ labels  given to the show, people tuned in and …got hooked

When I went to bed after watching the Television Academy’s From Scotland to Paris: A Behind the Scenes Journey with Outlander, https://www.youtube.com/watch?v=vo0aWxwY2EA I dreamily fell asleep convinced that I had just witnessed something very special. The astonishing level of creativity, skill and …love demonstrated by all involved in the creation of this show was so evident that as a fan I felt proud and strangely emotional. So, after reading all the positive reviews, watching all the insightful interviews, and being gob smacked by the panel, I thought I was prepared to watch the premiere.

I’m sitting here trying to find words.  Searching for words that have even the slightest chance of expressing how I felt about this episode.  I’m not entirely confident that I can, but I’m going to give it a shot.

THERE’S A FIRST TIME FOR EVERYTHING

I’ve always believed that no matter how great a movie or show is, if it is based on a book, the book is always better.  It makes sense.  An author has time and room to give us the details and let us see into what makes a character tick.  I have never seen anything that has caused me to doubt that belief…until now.

Just this week, I wrote an article for Outlander Online  http://wp.me/p57847-jFr that wondered how the beginning of the book would be handled.  How would the audience be told that Claire had returned?  I was concerned because despite our frustration (and downright pissed off at DGness), the fans I’ve talked with thought her opening with Claire in the 1960’s was powerfully discombobulating and kept us wanting to turn the page. As much as I admire Diana’s skills as a writer and adore her books, the TV adaptation told the story of Claire’s return to Frank better. This was so much more powerful and I can totally get why they did it.

As a reader of Diana Gabaldon’s books, I am as fascinated with what she doesn’t write, as much as with what she does.  What I’m trying to express is the idea that sometimes a writer doesn’t give us all the details and lets us try to figure out a characters’ motivation. Like a good author does.  It is often what is not explicitly explained that keeps us all talking about the books, speculating and theorizing. Ron and his writers have the enviable and monumental task of adapting Diana’s books into a visual medium.  They have explained that each episode has a story arc and that to tell the best story sometimes things have to be changed.  I finally get it.

HOW THEY TOLD THE STORY DIFFERENTLY, BUT STILL KEPT IT PLAUSIBLE 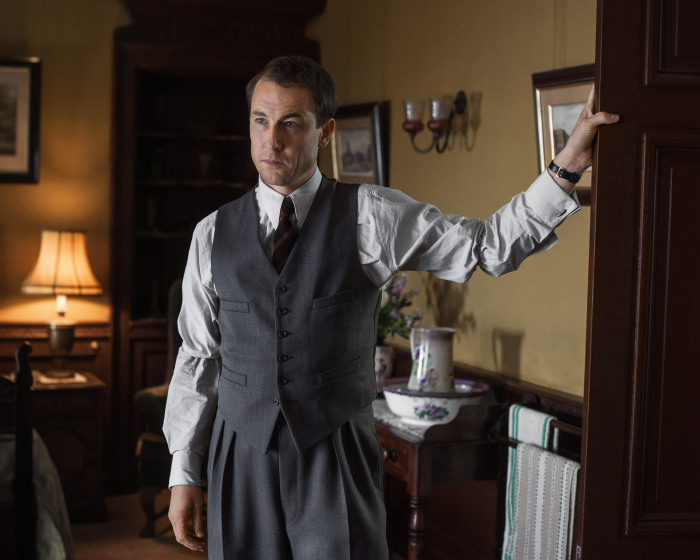 I’ve often said that the most controversial character in the book series isn’t Black Jack Randall, or Gellis, St.Germaine, or any other villian.  It’s Frank. Drop Frank’s name into a discussion of Outlander and watch the sparks fly. He is loved, pitied, and hated. But understood?  We have all wondered what Frank felt and thought, why he and Claire decided to stay together, why he got over his belief he couldn’t raise another man’s child, and if he still loved Claire or if he was just doing what he saw as his duty (cuz he’s not a cad). Did he believe her? Ron chose to answer some of those questions in his adaptation and I think the story is the more powerful for it.

In the very first episode, we saw Frank accept the possibility of Claire being unfaithful. “It wouldn’t be unheard of. Understandable…comfort”.  And, we saw Claire’s indignation over the idea that he would think she could ever be unfaithful,.  “There is nothing you could do to make me stop loving you.”  They foreshadowed his acceptance of the child with Frank’s interest in his own genealogy and their renewed attempts to start a family and then there is… Jamie’s ghost.

In the books, we never get to see or really know what Frank did when Claire disappeared or how he felt about losing her.  As readers, we became so engrossed in Jamie and Claire’s relationship that we soon forgot about poor Frank.  Diana has revealed more and more about Frank as her series of books has continued, but she is still keeping what Frank really knew and what he felt a bit of a mystery.  In my opinion, what Ron has done is very plausible and not a large departure from the Frank in the books.  Let’s look at the how it went down:

In the TV series, it happens a little differently, but the pieces are all there. Frank hears her story and although it is a “leap of faith” agrees to “accept’ it.  Knowing Frank, Claire doesn’t buy it and calls him out. He acknowledges that although he doesn’t understand her feelings for this other man, he believes her when she says she loved Jamie. But, he is now, he is there, Jamie is not. He only cares that she is back.  She then tells him she is pregnant and this is the catalyst that triggers his anger instead of when the anger is triggered in the books.  He still had a last straw moment.  She hit him where it hurt the most. Different yes, but, maybe better? Certainly, watching his joy and then devastation when he realized it was a mirage was powerful and echoed back to Wentworth and Jamie thinking he saw Claire and then realizing it was all an illusion. The pain and loss was real. Claire’s voice-over set the tone for the episode.  If she could have died she would have. Her anguished screams and sobs let the audience know she has been ripped from Jamie’s side and all is lost. And, then we see Frank… hardly able to contain himself as he rushes into the hospital.

Diana has told her readers to remember that we see things from Claire’s perspective and that Claire has her own self-serving reasons for wanting to believe the worst of Frank. She needs to keep him at a distance, she has a need to feel loyal to Jamie her true love and yet, she loved Frank. I saw that struggle tonight.  Her guilt over what she had done to Frank. Frank’s points about her ring and how her story confirmed that she would never have willingly left him rang true and you could see Claire flinch in the face of it.  She grieves for her lost love and yet, as everyone reminds her he is a ghost. So, when Frank offers up his conditions she remembers her promise and in a last self-sacrificing gesture of love for Jamie she stiffens her spine, lifts her head and  lets him go.

The many symbolic gestures in this episode like the hands transitioning her past and her future, her reluctant hug so like the one Jamie gave her in the Abby, were wonderful. Everything reminded me of something that happened in season 1.  Jamie’s memory, his ghost if you will, continues to wander the streets of Inverness.

I had the opportunity to use the books in a literature class.  The one thing that bothered my students the most about Claire returning to the future to live with Frank was how she could possibly ever look at Frank and not see Black Jack.  I had to agree that knowing that Frank isn’t Jack and that he is not responsible for his ancestor’s behavior might not be enough. I was glad to see the TV series addressed this issue right out of the box.  What I saw in episode one, maybe in part because it IS a visual representation of the story, felt more real to me; more believable.

It might not have played out on the screen exactly as it did in the books, but it could have.  The show deliberately connected the dots and fleshed out Frank’s character.  I think it was a smart move.  It all makes more sense, especially for viewers who haven’t and won’t read the books.  This treatment, in my opinion, makes all of their choices more poignant, more honest, and more powerful.  For the first time, I understood Frank and their decision to stay together and why they both did what they did.  I felt his hope (yet, you still wear my ring) and her painful resignation (I promised him I would let him go). 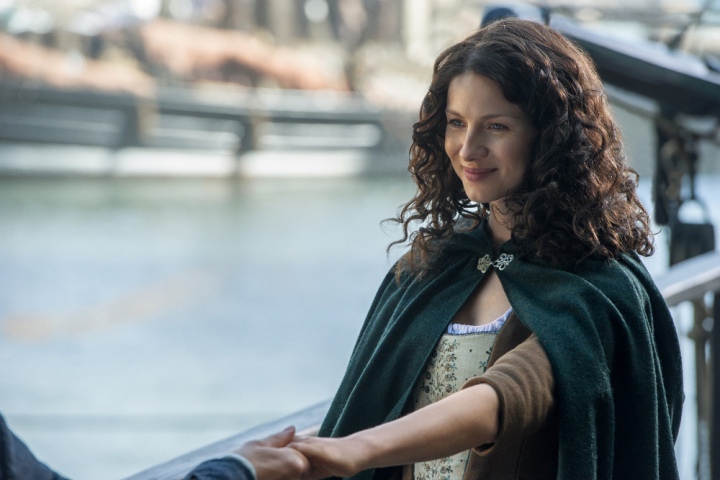 Kudos to Caitroina Balfe and Tobias Menzies.  Emmy worthy performances right out of the gate. Kudos to Tallship Productions and Starz you’re keeping your word to the fans and …I can’t believe I’m saying this…making a great story better.

52 thoughts on “I promised him I would let him go…Outlander episode 2.1”