Join 9,395 other followers
Follow My Outlander Blog! on WordPress.com 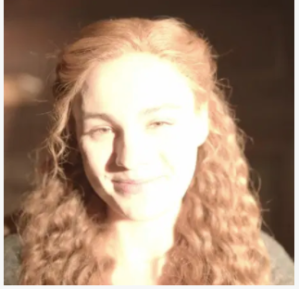 You simply cannot talk about Outlander 508 “Famous Last Words” without talking about the episode’s silent movie extended metaphor. So, let’s get it out of the way…I got it, I just didn’t care for it.  The horror was minimized rather than strengthened by the stylized effect. Juxtapositioned against Roger’s obvious trauma, it just didn’t feel serious enough. I kept waiting for Snidely Whiplash to show up (even though Tim Downie’s Gov. Tyron was a good substitute). I felt the flashbacks could have worked, seeing Roger’s eyes behind that mask was very powerful, but the flickering silent movie presentation took me out of the story.  Once again, I know what they tried to do, the silence, the movement from black and white to color, but this was ROGER hanging from a tree, not Penelope Pureheart tied to a railroad track. I needed to HEAR the commotion, panic, and anguish. So, having stated my opinion on the matter, as I’m sure many will, let me say I felt the rest of the episode was strong.  I always think Outlander shines when they focus on relationships, it is what makes it unique and watchable tv.

I know that the title of this episode “Famous Last Words” should be an obvious guide to what this episode was about.  Words said or left unsaid was definitely a theme worthy of delving into, but what stood out for me was how we all deal with the unimaginable, unexpected, and unfortunate.  I continue to be amazed by how timely these episodes are.  I can’t help but make comparisons with the unimaginable, unexpected, and unfortunate times we are currently experiencing.  The world as we know it has changed, probably forever.  How we will all deal with that is happening in real-time.  I find myself fluctuating between hope and despair sometimes hourly. The unimaginable, unexpected, and unfortunate has come to visit us all. Our plans, our dreams, our well-being, our safety are threatened and like Young Ian, many of us don’t know how to go on or if we even can. 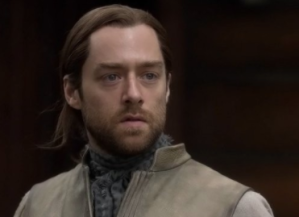 The episode opened with some lovely backstory.  Roger in his element was a joy to behold.  As a teacher, I felt the power of his words as he challenged young minds to think, to examine their response to the world around them, and to consider what legacy they might one day leave.  Words are indeed Roger’s stock and trade, his weapon.  He reminded us and his students that words are powerful and that they can wound and so, we must be careful how we use them.  Roger strives to make his words count and his deeds match.  He hopes that in the end, he will have lived a life worthy of those he loves. The irony that he was unable to have last words is not lost on me nor the fact that using his weapon to try to save Murtaugh and Morag led to the loss of a hugely significant part of his identity…his voice…his words. He is not the man he once was and as a result, like Clementine, he may be lost and gone forever.

Rik Rankin’s performance of a traumatized Roger was moving.  I’m always amazed when actors can communicate everything without saying anything.  His eyes were haunted, his demeanor subdued to the point of pain, and his attempts to use his voice excruciating to watch.  I felt the sharp needles when he swallowed and choked along with him when he tried to speak. I was moved to tears by his attempt to express his gratitude to Ian.  He is the shell of the man he once was.

How magical must Jamie think the future to be, full of cures for wee invisible beasties (don’t we wish) like the germs that make you sick and so, maybe they have a cure for something else invisible too…grief.  Claire assures him that no, the future has no cure for the heartache of losing someone, only time can cure such things.  When she said this, I was overwhelmed by how many people are grieving right now.  How raw and immediate is their grief, time hasn’t had a chance to cure them, however, I’m not sure we are ever truly cured of grief. We just find a new normal that includes our grief.

I found myself sadly smiling at Jamie self-medicating with whiskey because it is such a normal universal way to deal with things we can’t control. I think there are a lot of folks hoisting a drink right now.  Here in Ohio, our governor has a press conference every day at 2o’clock.  Folks have started calling it “Wine with DeWine” time (there are t-shirts).  The occasional need for whiskey aside, I have always admired Jamie’s emotional maturity.  He is allowing himself to feel and to share his grief with Claire and Jocasta.  With time, he will find a way to live without Murtagh.  Ian is another story.  We aren’t let in on the details of what happened to Ian in the Mowhawk village or the reason for his return, but it is obvious that something is wrong. Like Roger, he is no longer the man he once was, he isn’t the Ian we all knew and loved, but neither is he Mowhawk.  You can see the struggle he has to acclimate himself to life on the Ridge.  I was relieved to see John Bell play Ian with the same earnestness.  It is obvious he is now a man, but there are hints of the old wee Ian.  Lauren Lyle’s Marsali continues to be a revelation. She steals every scene she is in with her portrayal of our spunky Scottish lass.  Marsali has no idea how much her heartfelt admission of guilt means to Ian.  No, he reassures her, it is a good thing to feel you belong somewhere.  We all want Ian to feel he belongs in this family. 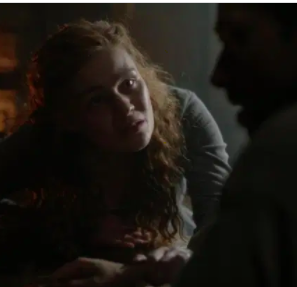 Roger being saved wasn’t enough.  His body is home, but HE isn’t and no amount of cojoling and patience will bring him back to the man Brianna loves.  Her fear is palpable.  She is losing him.  It all comes to a head when she walks in and finds Marsali picking up her tarot cards from the floor and Roger holding on to the Hanged Man card.  She tries to reassure him that she understands his loss and how, ultimately, it doesn’t matter to her how he sounds. This scene reminded me so much of Claire and Jamie in the Abbey. Bree loves him and will take him any way she can get him. Bravo to the actors for letting us see Bree’s fear and frustration and Roger’s pain at his inability to react the way he wants to, to give her what she needs from him. She needs to know that he is coming back and that he won’t forever be the hanged man. He cannot reassure her.

Soon after, she sends him off with some wisdom in the form of a piece of paper that is able to bend and fold and adapt.  Because it allows itself to be manipulated, it becomes a new creature, able to soar.  There is a reason paper, she says, is a gift for first wedding anniversaries and why diamonds are the gift for couples who have been married for 60 years.  She wants them to be like a precious diamond, the hardest substance on earth, able to withstand the pressures of life.  It was an excellent analogy and a heart-tugging hope.  Roger packs the plane and heads off to be useful, surveying the 5000 acres gifted as compensation from Governor Tyron. 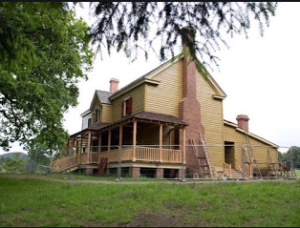 Claire discovers missing hemlock and voices her fears to Jamie that maybe Roger is in so much pain he might want to end his life.  We then discover it is Roger’s traveling companion Ian who cannot live with the pain of losing his wife. He symbolically buries his weapon, his hatchet.  He will no longer fight.  He wants the peace death will bring him.  But, the fates intervene when Roger, who has had his own epiphany, kicks away the poison tea before Ian can drink it.  Roger picks up his weapon, he uses his words to save Ian. They ride home to …fight.

Sing us a song

Roger returns to Brianna.  He tells her even though he was saved, a part of him died that day.  She does understand, she too survived a dark time.  He thought he knew what his last words would be, what his life would be, but circumstances changed and changed him.  In the end, it wasn’t his words that mattered, it was the people in his life, specifically her.  He will always sing for her, even if she isn’t there or even when his voice is unable.  He has allowed himself to become the paper airplane, so that he can have the chance to become a diamond.

May we all become diamonds

Our lives have been hijacked by an invisible wee beastie.  Like Ian, we haven’t the words yet to express our fear and grief. Many of us have difficult decisions to make, life-altering decisions. Like Jamie and Jocasta, we have to find a new normal.  Like Marsali, we have to grab on to happiness and belonging where we can find it.  Like Bree, we must hold on to hope. Like Roger and Ian, we must pick up our weapons and fight.  May we all weather the storm and emerge knowing what truly matters, may we all become diamonds.