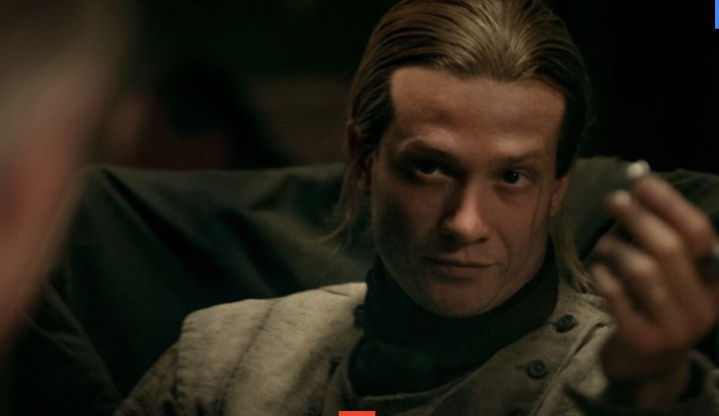 I almost felt sorry for him, as he seemed so eager to be a proper father, and a gentleman worthy of his son.  His tears moved me when he spoke of being an orphan.  I reminded myself that most people are not born monsters they are created.  I wondered how we can hold accountable someone who has had no moral guidance? How can we not pity a man who has no first-hand experience, but only “heard” someone can learn to love?  I know it is true that hurt people hurt people, but …I don’t understand how… Despite my being able to see Stephen Bonnet as human, it didn’t take me very long to stop feeling sorry for him.  No matter how he became who he became, he is damaged goods without empathy or a moral compass.

It is my opinion that most human beings are guided by a sense of morality, conscience, empathy, and warmth towards others.  I don’t believe Stephen is guided by these things, his “personality disorder” causes him to have a rigid and unhealthy pattern of thinking and behaving no matter what the situation.  As a result, he has significant problems and limitations in relationships and social encounters, he can merely mimic others’ behaviors and actions. People like Stephen Bonnet tend to interpret words and behaviors personally.  They think of themselves as victims who have been treated unfairly. This then results in the type of behavior we saw on our screens, the mistreatment and abuse of those they perceive have hurt, slighted, or even inconvenienced them. He experiences no guilt or remorse for the people he has brutalized.  They deserved it.

At the core, Stephen Bonnet believes he is less than others.  We see evidence of this in how quickly he reacts to any suggestion that he might not be a gentleman or that he isn’t honorable.  Most hurt and traumatized people will do anything to protect what little self-respect they have. This is then how their reality becomes contorted. The people they hurt deserve it.  He believes whatever version of reality serves his belief system. He thinks he wants to be a good father to Jemmy and learn to love Bree.  He sees this as a noble gesture on his part.  He expects everyone else to buy into his version of reality.  That kiss.  The one that took so much sacrifice for Bree to make?  It seemed remarkably gentle and tender given the situation, but Bonnet saw her lack of lust as a betrayal.  He then “shows” us his idea of what constitutes lovemaking.  I had to look away.  I was a traumatized Bree hiding from the monster she knew was coming for her next.

Damaged people like Bonnet will repeat their version of reality to themselves as many times as is needed to believe it wholeheartedly. Stephen has decided to believe in a nihilistic view of life where fate rules. Throughout the series, he reminds us of his belief by talking about fate and flipping a coin to determine his choices.  Bree picks up on this belief and tries to use it to her advantage.  In fact, Bree’s navigation of this situation was fascinating.  Her thinking on her feet and manipulating his personality disorder made me curious.  I looked for information on how women trapped in abusive relationships cope. I didn’t conduct an extensive or particularly scholarly exploration, but I didn’t find a lot.  No matter what I typed into the search box on my computer, what came back was information on “how to leave an abusive relationship”.  Which was good information, but I kept thinking about how do women survive the moment.  How do they keep living to be able to leave?

The dynamics between Bonnet and Bree in this situation felt pretty realistic to me.  Bree KNOWS Stephen is crazy, but true to form he thinks he is sane.  His actions make perfect sense to him, he can rationalize everything he is doing.  She is left trying to reason with a crazy person.  I felt the tension inherent in that sentence just typing it.  How does she try to survive?  At first, she is defiant, dropping insults and snide comments. But, soon it becomes clear that Bonnet is sincere in his delusions and they pose not only a danger to herself but to Jemmie.  I watched the realization cross her face as she shakily held the creepy doll Stephen had bought for his “son”.  She has to quickly switch gears, think on her feet.  She knows how fragile is this desire of his and how temperamental are his reactions.  I kept thinking he was like a pet alligator.  No matter how many times you feed it or pet it, one day it is going to snap your hand off.  She cajoles, feeds his delusions, gives him the nurturing he seems to so desperately need.  She reassures him and treats him with gentleness, and plays on his desire to be a gentleman and father.  She pretends to buy into his reality.  She tries to act her way through this until she can find an opening.  Stephen seems to believe her.  But, he is always hyper-aware of what he perceives as a betrayal.  The problem with alligators is you never know what will make them snap.

A simple kiss was all it took to change Stephen Bonnet, gentleman, and potential father, into a man who would sell his son’s mother into sexual slavery.  How quickly he devalued her, “6lbs is all she is worth…just property…”.  She is doomed and knows it.  She makes a final plea for Jemmie. Suddenly, Bonnet has consummate narcissistic confidence in his abilities and tells her not to worry he “will take good care” of him.  I shivered with fear. 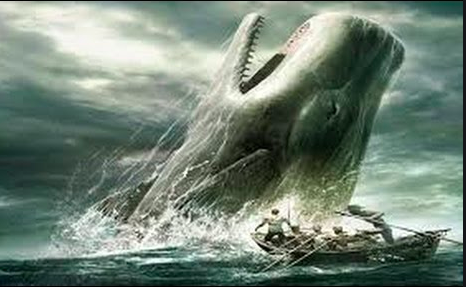 The rescue, Roger’s beatdown of Bonnet, and Bree having the final word in how Bonnet will be held accountable for his actions was satisfying.  We always like it when evil has to pay the price for its evil choices.  But, the show wasn’t done messing with our emotions just yet.  We had one final scene to process.  During Bree’s captivity, we learn that Stephen has a fear, reoccurring nightmare. The writers decided to use the story of Moby Dick as a vehicle for revealing Stephen’s fear of drowning.  Pretending to read the story to Bonnet, Bree tells the tale of a sea captain who nails a coin (I see you Megan Ferrell Burke, nice catch) to a mast as a reward for the killing of the white whale he so relentlessly pursues.  Bonnet, charmed by the story and the fact that his “son” likes tales of the sea, is absorbed in the story.  He wants to know if the sea captain wins and is dismayed when he hears the “monster prevails”.  She shares that the ending depends on who you think the monster is… He tells us that the sea is full of creatures that feed on each other and that the sea itself is hungry for souls, “she calls to me”.  He shares that he has a recurring nightmare wherein he drowns and no one comes to rescue him.  He is worried about his momentary moment of weakness, and that sharing his fears will cause Bree to think less of him. She assures him and us that she “Couldn’t think less of him”.  I had to wonder at her tremulous smile and eyes shining with tears, perhaps it was her own fears that this ruse would not protect them from THIS monster and she would never be able to comfort her son again.

I know the final scene will cause a lot of discussion.  Was it mercy or just making sure he was dead? I love that they did not tell us.  I, of course, have my own opinion.  I have to wonder if when Bree said she would let the courts decide his fate, she truly understood what that meant in this time even though her father said Tyron might make sure Bonnet hung.  Was her mind thinking of justice in her time?  The court’s choice for Bonnet’s justice was to hang him on a post in the sea, and wait for the tide to drown him.  The visual irony of three criminals hanging from crosses wasn’t lost on me nor that Bree’s decision to let the court handle justice resulted in Bonnet’s living his last moments in his recurring nightmare.  The whole scene begged for mercy.  We watched as everyone walked away, no one came to help just as Bonnet feared.  But then,…we follow Stephen’s eyes to the shore where Brianna stands with her rifle against her shoulder.  We see the relief on Bonnet’s face right before we hear the shot…mercy at last.

Roger’s question caused us all to reflect was it mercy or revenge? When I reflected on Bree aiming her gun at Bonnet, I saw all three of her parents.  I saw Frank teaching his daughter to shoot preparing her for a time without him, I saw Jamie protecting his family at any cost, and I saw Claire …giving mercy where it wasn’t deserved.  Bravo. A story well told.

40 thoughts on “Of Monsters and Mercy… a reflection on Outlander 5.10 “And Mercy Shall Follow Me””