It was difficult for me to think of anything else as I sat down to write my reflection. I can hardly remember Claire and Jamie gazing lovingly at baby Germain.  Claire’s emergency surgery, Murtagh’s being in real and immediate danger, a tender love scene… and an ugly quarrel, all faded in significance to that image of a trembling hand. The image I’m still thinking of this morning is of Brianna reaching for her boots neatly placed outside the door of where she was pitilessly raped.  The weight of meaning in the gesture that placed those boots side by side is grotesque.

Some how shifting the focus to the inn’s common room and the reaction of its inhabitants made what was happening behind those doors even more monstrous. I am grateful that they did not show the actual act, but I cannot say it made what happened less brutal. I’m not sure which was more shocking, the rape or the indifference. A soul WAS “as rare as hen’s teeth” in that inn. Her pleas for help went unheeded by people in the next room. They barely seemed to acknowledge what they all knew was happening. They knew and did nothing, nothing except laugh, smirk, go on about their concerns and …tidy up.

My heart broke for Bree as she sat up from the table her hair in disarray, her nose bloodied, her shock obvious.  As her mind slowly tried to make sense of her surroundings, her body took over and she gathered her belongings. Stephen Bonnet’s comments about having had a more lively ride, her lack of virginity, and his being an honest pirate incensed me, but they were just so much noise to her.  As she reached for that ring, I thought of how tarnished it was.  That beautiful symbol of Jamie’s love for her mother was now a symbol of violence and loss.  In the same day, she lost her virginity and her agency.  The rabbit hole is a violent wretched place for women.

I wondered at a society where the rape of a young woman was so common place and accepted that it would go virtually unmarked. As I looked for answers, I kept going back to the theater and Claire’s remark about the society of the wives and the Governor’s wife’s assurance that she would help her navigate the waters.  I believe the women of “Wilmington” have a lot to say about how rough the seas are for women then and I would argue…now.

Agency Down the Rabbit Hole

There were a lot of different women in this episode, some accepting of their assigned roles, some pushing at the expectations placed on them, but all without complete choice of their own decisions and lives. Agency is based on the idea of choice.  Personal agency is in direct proportion to your ability to take action, be effective and influence your own life. We make personal choices that then lead to us taking responsibility for those choices. It seems to me that the women of this time had little choice, and therefore little agency and little control of their own lives. Women at this time were subservient to men and their roles were dictated by a patriarchcal society.

Marsali practically glowed when she talked about being a mother.  As a mother, I understood her heart full to bursting with love.  But, I also felt the double-edged sword of motherhood she described.  I understood the fear of what we cannot control and our need to protect our children that would allow us to sacrifice for them.  Even as I felt pity for Claire and her inability to even acknowledge her own motherhood, I recognized the prophetic truth of her words.  We cannot protect our children from everyone and everything. And, it seemed to me that women of that time must have felt even more helpless due to the lack of agency. Marsali seems happy with her role as homemaker and mother and that is great. However, I am completely aware of how her circumstances would change if she did not have a man in her life.  Her choice in how she would earn a living and provide for her child would be limited.  Without extended family she would most likely be destitute.

Lizzie is a perfect example of what can happen to a woman who is poor and without a man to  protect her. Lizzie has basically been sold.  She belongs to someone else and if it were not for her father begging Brianna to buy her terms of indenture, she would most likely be the property of a man who would use her against her will and make her his legal sex slave as a “concubine”. And, NO ONE would blink an eye because of the patriarchy of the time. 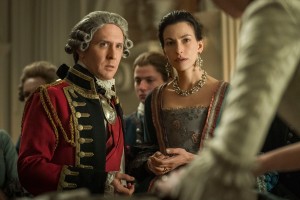 Martha Washington and the Governor’s wife

Life for a poor woman like Lizzie is indeed bleak, but money still does not equate with agency for the women of Wilmington. Case in point? Martha Washington and the Governor’s wife.  There were so many little moments and off- hand comments that illustrated the lack of power women had over their own lives at this opulent event. The women’s interaction with the men at the theater was limited to polite and expected “small talk” and praise for the nobility of the men. The Governor introduces Jamie, but not Claire. He seems truly bothered that Claire keeps inserting herself and her opinions into the conversation and condescendingly urges her to let Fanning’s “physician” take care of him. I love the knowing look that happens between Jamie and Claire when the Gov. decides to ditch Claire to his wife and the society of the women.  I love Jamie for letting Claire know he knows her value even if they don’t.  I’m not sure exactly how far they can buck this system and still function as part of this society, but they do buck it when it comes to Claire’s healing.

Fulfilling her assigned role as hostess, the Governor’s wife comments on Martha Washington and calls her the face that launched a thousand ships and filled them with tobacco.  Her wealth and wit seem to set her above the other women of the Governor’s wife’s acquaintance. I don’t know why exactly, but I got the feeling that the relationship between Martha and George approached equality. I think it was the way he paid attention to what she said. However, she will never and historically was never more than the “woman behind the man”.  Money and wit are not enough to gain her complete choice and agency.  She is still just a woman. 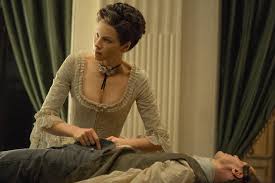 Of al the woman of Wilmington society, Claire is the one who pushes the envelope of patriarchy the most.  She continues to act like the physician and capable woman she is despite the obvious shock and disapproval of the men around her. Once again Jamie’s complete trust in her skills and abilites to naviagite ANY rough waters they face is evident. He leaves her knowing she will do what needs to be done.  They are truly partners and equals.  The reactions and panicked concern of the Govenor and the doctors was a fantastic illustration of male attitudes toward a woman who dares to go above her assigned role.  My favorite line was uttered by the doctor who thought all we really needed was to blow smoke up someone’s ass!  The moment that bothered me the most? The clapping for her.  They came to see a performance and she gave it to them.  The play wasn’t that great, but the trained monkey doing surgery was amazing! 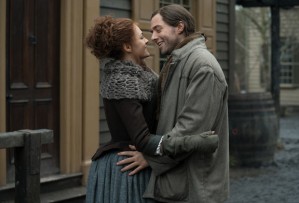 There were a lot of callbacks to the relationship between Jamie and Claire in the intimate scenes between Brianna and Roger including the fight at the river. Jamie thought Claire should do what he said because she was his wife and 200 + years from that fight Roger thought his wife should do the same. When it was all said and done, Roger didn’t fair very well in the treating his wife like an equal department.  I will give him a break as things are said in hurt, fear, and anger we don’t always mean.  However, the fight at the river ended in forgiveness if not complete understanding.  That didn’t happen here despite it being obvious that everyone’s “guts” were being torn out.  That Roger left without a word didn’t sit well with me and I am wondering why this particular part of the story was changed. I’m not happy with this Roger.

As we watched Bree walk through the dark streets back to the inn, it was impossible to not experience a premonition.  She moves about this world as if she is in her own time.  She truly doesn’t know where she is and what the rules are for women.  She tells Bonnet he has mistaken her.  It is she who is mistaken. She thought she was Brianna Randall.  She forgot she is just a woman in Wilmington.

43 thoughts on “In the Society of the Women of “Wilmington”…a reflection on Outlander episode 4.8”