Kudos to Matt B Roberts on his directorial debut and congrats to the writers’ room who somehow managed to wrestle this monster of a story into 13 episodes.  There were so many wonderful nods to the source material and its fans and yet enough surprises to keep me wondering what would happen next!  I love the show’s ability to call us back to previous scenes and seasons.  The Faith music caused me to get chills and they gave us a story that has come full circle.  The season began with Jamie near death and ends with Claire near death.  The dancing, so different and yet so reminiscent of Craig Na Dun, was a wonderful connection that explained the presence of the maroons.  And, constantly, woven throughout the story is the thread of fate.  We are reminded that all of this was meant to be and that there are forces beyond our understanding at work to both separate our two and keep them together.  There was a supernatural battle being fought for the shape of the future.  I had to wonder whether Zeus and Hera were at it again. 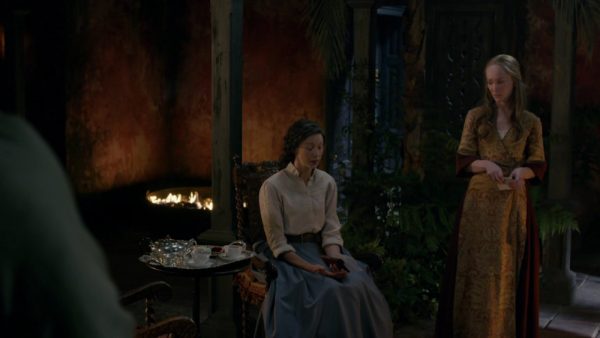 I was so proud of the observations I garnered from the last episode.  I talked about the differences between the two time travelers Gellis and Claire.  The scenes in Rose Hall bore out what I thought.  Gellis has completely identified herself with her ability to travel. Claire accepts it as just part of who she is, but it isn’t her identity.  I loved the interplay between the two.  The cat and mouse game was fascinating.  Our Claire is such a bad liar and Caitriona played it off so well, “My driver dropped me off at the bottom of the lane and I got lost trying to find the house…”.  yeah…riiiighttttt. On some level, we got the feeling that Gellis really wants to believe that Claire is her friend.  I believed her when she said it has been hard.  She is tearful when she asks Claire why she has pursued her all these years especially after she sacrificed everything for her at Cranesmuir. She is the outsider of all outsiders.  Gellis has never met another traveler besides Claire and she feels a connection to her and yet, she cannot trust her, “Why are you here?”  They come together “ominously” according to Gellis.  Claire is smart, but she cannot keep up with the deceptive Gellis.  She cannot think like Gellis because she hasn’t her motivation and mindset, her sacrifices for the “greater good” aren’t motivated by power. So, she reveals the very thing she shouldn’t in an effort to gain Gellis’ trust, Bree.  When we see Claire at the end of the scene looking around the hall, I could practically hear her saying to herself, “what the hell just happened?” 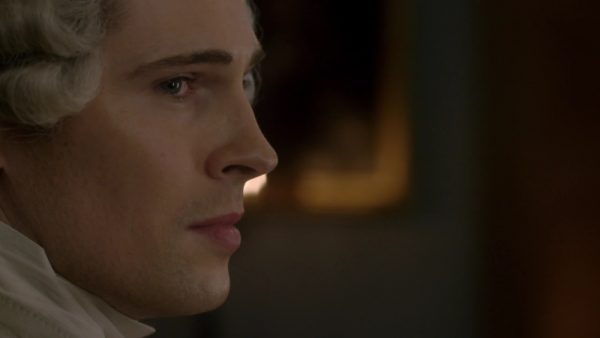 Lord John!  What a great scene, played to perfection.  I loved that Jamie seemed a bit surprised at John’s ability to navigate this situation and his power play.  John large and in charge was a beautiful and sexy sight to behold! I loved Lt/Capt Leonard’s comeuppance, he deserved it the ungrateful little upstart. John is all a man should be, generous, loyal, loving, kind, and strong. I’m still hopeful Diana will write him a partner worthy of the wonderful man he is. 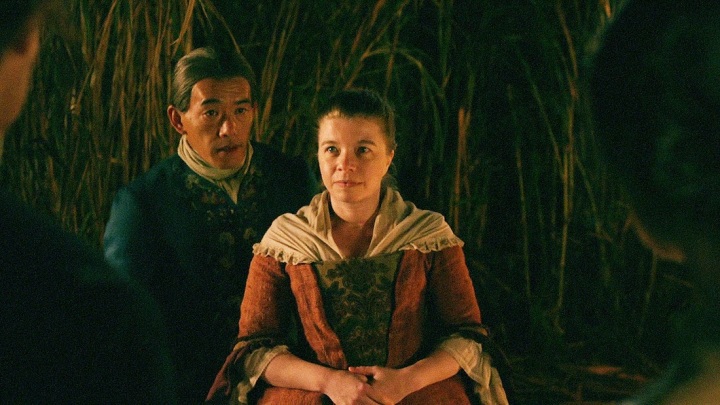 The show keeps giving us great couples to love. We see the reflection of Jamie and Claire’s relationship in Fergus and Marsali and what wasn’t there to love about Margret and Mr. Willoughby? The show gave us another couple who loves beyond all understanding.  I admit to feeling that they and Jamie and Claire were very out-of-place in their surroundings.  They didn’t fit and I was a bit jarred by all that was going on around them. The frenetic dancing and voodoo like ceremony seemed so incongruous with Margret’s smiles and her holding “psychic” court.  Tein Cho’s assertion that they had been invited by these “kind people” was in direct contrast with the stereotypes around them.  It helped me see it all in a different light.  I got the feeling that this ceremony was ancient and wanted to know what the other ceremonies for standing stones and fire days looked like around the world.

I love that Jamie and Claire are completely working together as a team.  The call back to Faith and their commitment to their daughter Bree was powerful.  They were in complete understanding, sealed with a kiss and a familiar nod.  Let’s do this.  What followed was primal. Claire was fulfilling her destiny.  I found myself wondering at the powers that were controlling or attempting to control them.  I’m not sure if Zeus or Hera won, but Bree is safe from the zealot Gellis. We were given a moment to fear that Claire was being drawn back through the stones and the only thing powerful enough to combat its lure was Jamie’s touch.  It is a lovely extended visual metaphor, the power of their reaching hands, we have seen them reach out to each other so often.  And, Jamie’s last look at Bree’s photo was everything. I loved that Jamie took the time to reassure Ian and Claire and drew them into an embrace and held them close.  At that point, I felt we all needed a hug!

With time to serve her suitably

True to form, Jamie and Claire have drawn close through facing difficulty together.  If there were any barriers left between the two they have been broken down by the time they are back on board the Artemis.  I loved that the show slowed things down and gave us this wonderful scene.  I was so happy to see them flirting and teasing.  The humor between these two is a joy that I have missed.  They are comfortable with each other once again.  You can feel the trust and confidence in their love and their future together.  It feels solid and true.  I recognized this couple.  They are altered by experience, but I recognized them nonetheless.  This was Jamie and his Claire, Claire and her Jamie, reveling in each other.

The Eye of the Storm

I have given the next series of events a lot of thought.  It was fantastical to be sure.  At first, I was struck by how over the top it all was.  How in the world did Jamie know where to find her in that roiling sea and how could he have swam to her? Jamie is great, but that great?  So, I asked myself, why.  Why, did Matt and Toni and the others choose to play this in such an over the top way?  They certainly had the power to do it differently. What were they trying to tell us?  I thought and I thought and I came to the conclusion that it didn’t matter.  It was a full-out, over the top, love letter to this couple and the thing between them that they cannot name, but is always there.  Why wouldn’t Jamie jump into the sea after Claire?  She would jump into the sea after him, or storm a prison, or travel through stones. Why would the thing between them not draw him to her? Why wouldn’t Zeus or Hera intervene to save them? One of them put them in a hurricane, why wouldn’t the other place them in the eye of the storm?

The story has shifted gears, it is no longer about falling in love or finding a way back to each other, but about how people stay in love.  The show has a chance to break new ground once more.  They can show us the intricacies of a long and loving marriage.  They can show us two people who are building a life together and stay together.  No matter what they face, and the Gods know they are always facing something, the love they share is a calm center in the storm.  Jamie and Claire are the core of this story, they are the anchor we hold on to that keeps us all enthralled and believing in the possibility of a love that is all that it should be.  I fell in love with the Jamie and Claire in Diana’s books and I’ve fallen in love with the Jamie and Claire in Ron’s show.  Both couples have a lot to tell us about living and love and I for one, am ready for the new world.

93 thoughts on “The beginning of forever…A Reflection on Outlander 3.13 “Eye of the Storm””