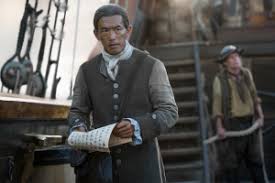 I’m sitting at home drinking hot tea and convalescing from some sort of bug. This is one of those times when real life conspires to interfere with my Outlander life.  I’ve watched the “Doldrums” several times and found it delightful, but was too sick to think about what I saw let alone write.  What I’m thinking about this morning, in between sips of Earl Grey, is the journey. Voyager is the name of the book this season is based on and I find it aptly titled. This couple has been on a voyage back to each other and the love they once shared. Diana’s story of two passionately committed people and the show’s version of their story have taken us on a voyage too. Both versions are epic in scale, detail, and truth about the human condition and I’m finding myself grateful for both.

The line of dialogue I can’t get out of my head is “A story told is a life lived”.  It reminded me of a line from George R.R. Martin’s A Dance With Dragons, “A reader lives a thousand lives before he dies, said Jojen. The man who never reads lives only one.”  I shared last week that I almost quit writing the blog during the drought because it just seemed too trivial a concern in these current times.  I did not because I decided I enjoyed writing it and that was okay, no matter what was going on in the world. As I sat down to write today, I thought of my belief that what I was doing was trivial and then I thought about the joy Outlander’s stories have brought into my life. Not only joy, but insight, empathy, and healing. Mr. Willoughby’s story captivated the sailors and the show let us see that all who heard were moved by it. He told his story and then he had to let it go. I couldn’t help, but think of Diana and the creators of the show. When her book is finally ready and that first copy hits the shelf or when it comes time for the show to air, the story is in some ways no longer theirs. They tell the story and then they have to let it go. Just as each person on that ship listened to Mr. Willoughby’s story and connected it to their own lives, so do we. Story telling, I have now decided is not a trivial pursuit, but a noble one and a story told is a life… well lived. Because of writers and film makers, we get to live a thousand lives.

I had an experience with a poem that illustrated this point for me. Sam Heughan had tweeted a poem written by Kim Moore he had read and had evidently found moving. 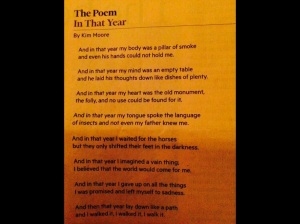 I read the poem and then speculated about why this poem would have meant something to Sam. I pulled it apart line by line and made connections to what life might be like for a struggling actor and wrote an article about it.  The poetess read my article and wrote to me! I was of course completely wrong about the intent in the poem.  It was in fact, a poem about an abused woman.  I was a bit embarrassed, but she assured me that it was okay and that in fact, she was fascinated.  She said she was glad I was able to see so much in the poem because it meant that the poem had life beyond her. Once again, a story told is a life lived.

When I went to college, I was already an adult with 28 yrs of life experience. My husband gave me a little insight into what college was likely to be like for someone such as myself, “You’ll be like a sponge . You’ll love every minute.  The professors will love you and the kids will hate you for making them look bad! “. He was pretty prophetic.  I did love every minute and the kids tended to roll their eyes at me and my eagerly raised hand. I wanted to discuss and share! They wanted to pass the class with as little effort as possible and I was making them look bad. However, after a long night partying and a short night studying, some of my fellow students saw me as a valuable commodity, “Let’s ask Beth what the reading was about”.  I may have gotten my fellow students out of a sticky situation temporarily, but I always felt they were missing the point…reading was life changing.  At least, I felt so.

Reading helps us to experience things we may never have the chance to in real life.  Studies are indicating that people are inspired to make changes in their own lives as a result. In the article,  If You Didn’t Love Reading Before You See This, You’ll Love It After  by Sarah White, the author says that  studies show that reading fiction,

“…teaches you to be human…helps you see other people’s perspectives. A good book is the closest we can get to being in another person’s skin, and it can help us understand the real people in our lives a little better. …Reading can give you a new perspective. Here I’m not just talking about getting to peer into different worlds, but the fact that reading about life situations similar to your own may give you a different perspective on things. Whether you need help navigating a breakup or dealing with your parents, there’s a book for that.”

There is also a movie for that. Film can impact us in a very similar way. Especially, if that film is full of visual metaphors and visceral images. https://www.psychologytoday.com/blog/is-your-brain-culture/200903/your-brain-movies 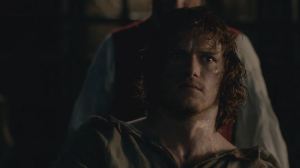 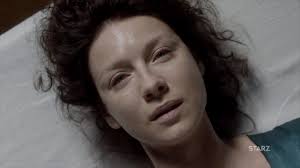 I know that what Diana created for me was a reading experience that I have yet to duplicate. I read other things, I just don’t enjoy them as much or learn as much from them. I’m still not sure exactly why her words and this particular story resonates with me, but it does.  What this show has given me is another way to interact with her story.  Although the series will never replace the books for me, in some ways, I found it just as impactful and at times, more so than the book. I don’t think I’ll ever be able to forget the visual story I was told in “Wentworth” or “Faith”.  Seeing emotions on a real face is impactful and quickly takes you to a place of empathy. When we get lost in a book, or a quality film, studies have shown that we might actually change our own behaviour and thoughts to match that of the character.  It is a phenomenon that researchers are calling “experience-taking”. They found that “experience-taking’ can lead to real-life changes. Strongly identifying with a character who overcomes can lead to over-coming!  Experience taking…a story told is a life lived.

I’m sure, I’m not the only one who has found this to be true in their own lives.  I too have been changed by books. The Box Car Children and Queenie Peavy helped to shape the child I became.  Corrie ten Boom and The Hiding Place taught me about faith and what it means to care for others and Diana Gabaldon’s Outlander series and the TV series have both enriched my understanding of relationships and truths about life.  If you can tell a story that can do that for a person than you are truly part of something bigger than yourself and by letting go of your story and releasing it to the wind you allow others to live a thousand lives. Bravo. I’m looking forward to the rest of the journey.