Join 9,390 other followers
Follow My Outlander Blog! on WordPress.com 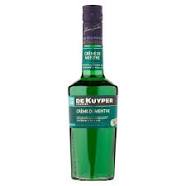 I loved Jamie’s assertion to Claire, in this week’s episode of Outlander “Creme De Menthe”, that what they were experiencing was not “but a wee bit of chaos”.  It kind of summed up this last week in the fandom, too.  Jamie assures Claire that they had dealt with this kind of thing before and survived. As a fandom, so have we. It has been an interesting week, to say the least.  Lots of discussion about adaptations. I’ve got to say that I was anxious for a new episode to be shown, so that we might be able to move on a bit.  That this episode was an all-out adaptation was irony at its finest!  Story-lines were condensed, characters changed, action moved, etc.  Everything we book fans hate.  But, unlike last week, I was expecting no “kerfuffle” because I saw this as one of those episodes that happen every season, full of foreshadowing and intros to new storylines. Then I was told this morning that even Diana Gabaldon had a few things to say about this episode on CompuServe.

Dear Vicki–
You know I said there was one “Laoghaire-redemption-like” thing this season?   Mm.  Hm.
Jamie lie to Ian’s face?   The one person in the world (other than Claire, who was there) that he ever told about Wentworth?  His blood-brother from the age of eight, his brother-in-arms, his brother-in-law, his best friend, for whom he’d lay down his life?
Oh, sure.  Why wouldn’t he?
As for Claire…you should have seen her _before_ I said Intemperate Things…

I’m assuming they heard her and tempered Claire.  Diana has always maintained that she is mostly happy with the adaptation.  Of course there will be things she is less happy with, but I have to say I admire her ability to be so objective about the whole process.  I’m pretty sure if I were in her place I’d be as protective as a mother tiger.  Last week, Jodi Picoult, a very popular writer who has had her books adapted to screen and might know a thing or two about the subject, tweeted that the Outlander folks are doing a great job and Diana agreed.

I do indeed! Couldn’t be luckier, to have fallen in with such talented, conscientious, OCD people! #thatsacompliment

Jodi PicoultVerified account @jodipicoult
Replying to @jodipicoult @OutlanderWriter @Writer_DG
As a writer, and a forever fan of @Writer_DG, I can say with authority that her material is in excellent hands. She knows it. I know it/5
11:31 AM – 26 Oct 2017

This week’s episode took us in all kinds of directions that led us away from Edinburgh and put us on the road back to Lallybroch.

This Week’s Installment in This Epic Adventure 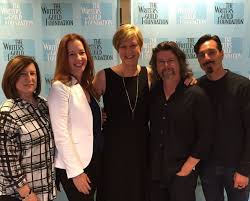 I had a chance to listen to the 3.06 podcast this weekend, something I don’t normally get to do. It was fascinating. I was struck by the comradery, the genuine excitement about the episode, the attention to detail, and their commitment to produce a show that honors the source material and characters. I still would love to be part of the “heated” discussions that happen!  To me, the fact that do happen says volumes about these writers, directors, producers, and actors.  They care.

Several things stood out to me.  For example, when any decision is made to change anything from the book the “domino” effect is considered.  They ask themselves how this will change the story over time and what effect the changes will have on the story they are trying to tell. Sometimes too many things are affected and too many changes would result from one change and so, it is abandoned. Other things like Fergus having a wooden hand instead of a hook, do not and so they go ahead and make the change.  No decision is taken lightly when these folks adapt. So, it will be interesting to see how the MANY changes to the story we saw in this episode will affect the story over time.

There has been so much discussion in the fandom about whether or not the “character” of the characters has been changed i.e. if  Claire or Jamie, respectively, would ever “do” that or act that way. It sounds like a great deal of the time in the writer’s room is spent discussing the characters and their motivation.  Would Jamie have lied to Ian’s face and why?  Would Claire really have been so insensitive as to tell Jamie he doesn’t know what it is like to be a worried father? I’m not sure what the rational was, but I know after listening to this podcast, it most certainly was discussed and after this morning, I know Diana gave voice to her concerns, LOL!  I have to keep reminding myself that this is an episode, a piece in a bigger puzzle.  Ultimately, we probably won’t be able to judge if these things were a misstep until the end and it’s all in the can anyway!  There isn’t a thing that can be changed no matter how much we voice our concerns or disapprove.

A friend said what struck her watching 3.06 was that Claire had regrets, but that Jamie had secrets. I listened as these writers and producers talked about how to play those very things on the screen. The decision to have Jamie confess all or hold back, what constitutes lying, lies of omission, Jamie’s having no time to prepare for this moment he thought would never come, and his honorable character were all taken into account.  For instance, the group decided to have Jamie tell Claire about Willie in part because he trusts her with this information and his feelings about another child he lost.  I don’t disagree with the decision to have him tell her about Willie.  Of course, he would be thinking about all of his children and the need to tell Claire.  Another thing that I learned during this podcast is that this IS a collaborative effort.  The actors have a voice too. They have a relationship with their characters and want a voice on how to “play” what they “know” about them.  I respect that.  The performances have been stellar and if Sam believes this is the Jamie he knows, I’m more than willing to give him the benefit of a doubt.  I trust that we will see more of how Jamie felt about those pictures, Bree and the sacrifice. And, to tell the truth, I’m getting excited for the drama and truth that slower reveal will bring.

In conclusion, I learned that a lot of thought goes into everything and every decision.

Welcome to the past Claire.  We were reminded that women are at risk everywhere and all the time.  It’s a good thing the last episode was longer because this story isn’t sitting still for long and evidently, the traditional second honeymoon in the 1700’s is one night. 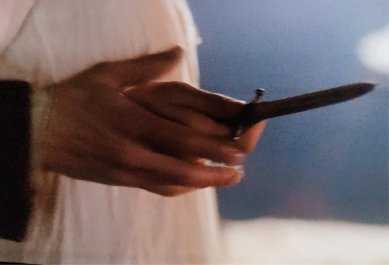 I felt the whole scene with Claire risking everyone to care for a man who just tried to kill her was preparing the audience for her risking them all later for that same calling.  I got the feeling that Mr. Wiiloughby is becoming her partner in “medical crime” so to speak. I know folks were hoping for a bigger look at Claire’s life as a surgeon in the 60’s, but I think watching her practice her skills in the past might be much more interesting! Hmmm…she cracked a guy’s skull with a hand drill! 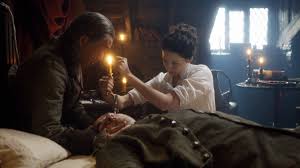 I know some folks think Jamie is being portrayed as a bit shady, but he has a lot of folks he is still responsible for and has very few options for once again becoming an upstanding citizen.  I found myself wondering if his aliases really have changed him a bit.  Maybe A. Malcolm can do things Jamie Fraser can’t.

Well done Steven Cree, I thought Ian’s response to Claire was brilliant and his statement that he and Jenny grieved over her for years and his asking where she had been had a tone of accusation.  Does he think Claire abandoned Jamie? Is that what we saw foreshadowed in the preview when Claire is asking Jenny for a second chance? 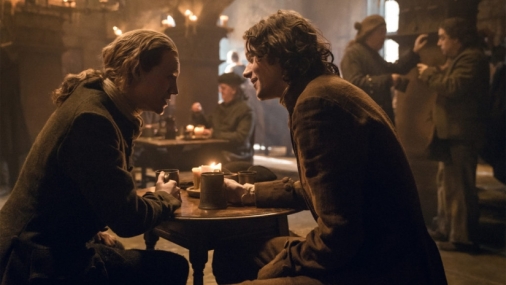 Ian and Fergus were quickly established as likeable characters that we should care about.  I’m really excited about the casting of these two actors.  I can see them both navigating what happens in the future. I am also happy with the change to the role of the Campbells in the story. I always wondered how Margret went from catatonic sister to seer extraordinaire.  This fits well with the Abandawe story line.

One question, why does every virgin in this story but Fergus think it is done like a horse? Just kidding, I laughed out loud.  The mean streets of Aberdeen and Dundee got a snort too. 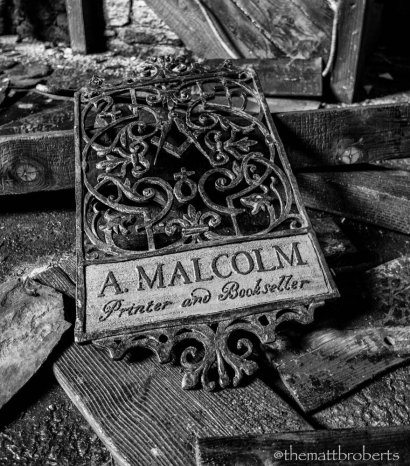 I mourned the burning of that print shop, but thought it was a good transition and I THOUGHT the fight between Claire and Jamie foreshadowed the emotions that will boil over when she discovers Jamie is married.

But, oh lort that preview.

I was going to write about how I thought the true beginning to forever for this couple happened when a certain conversation in front of a hearth in Lallybroch took place, but that just got thrown over a cliff…literally.