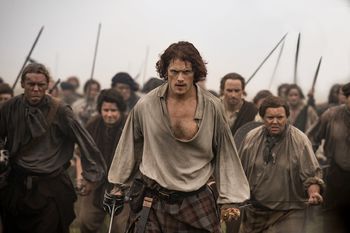 There were a lot of good articles written this week by reviewers who have seen the first few episodes of Outlander.  There was a lot of great insight, but I keep going back to the article written by Maureen Ryan of Vanity Fair  .  The article on the surface seems to be a report of a conversation had between the actors about the show and their roles in it, but I believe her article, in truth, goes to the heart of what is making this show successful.  She speaks to the care and committment given to honoring the source material and its characters.  She speaks to the commitment to their craft of all involved and their desire  to get this thing right.

Menzies: He’s not driven by ego, is he?

I found myself astonished that she would end the article in this way.  I know she has been doing this for a while, but wow, what a great choice.  I looked up from reading and said , “She gets it.  They all get it.”  I’ve always maintained that it is possible to find truths about life, what it means to be in a relationship, what it means to love, in the pages of Diana Gabaldon’s books.  I recognized myself and others in her stories.  If the sci-fi, time travel situation Claire finds herself in seems like fantasy, the feelings don’t.  I would often find myself nodding my head in recognition while reading.  It is perhaps why these novels remain one of my favorites and I re-read and never tire of what I find there.  Like the actors in Mo Ryan’s article, I find I can analyze these characters and their motivations because they are written with such depth.  Yes, Jamie isn’t motivated by ego.  Yes, Claire has a calling.  Yes, Frank is a tragic character whose only real fault is that he isn’t Jamie.  And, yes, it isn’t about ego for these actors, either, it is about their craft.  And, yes, because of the talent and commitment of all involved, it looks like the TV version of this story is only getting stronger and will have the chance to represent on-screen the reasons I love these characters and what they have to tell us about…us. 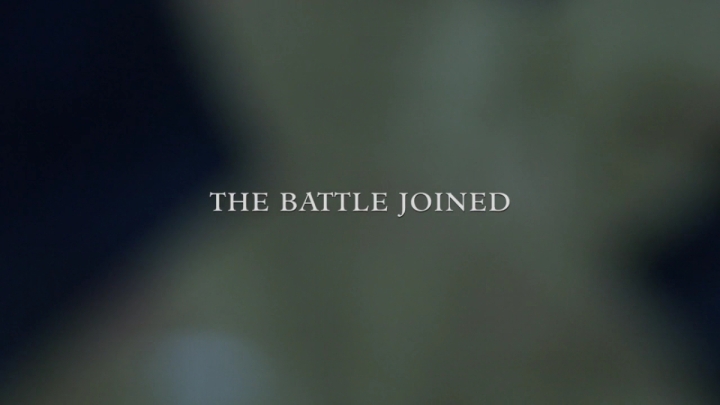 I heard that the first 10 minutes of episode 3.1 were breath-taking. I didn’t realize they meant that literally.  I had to stop watching, catch my breath and gather my emotions. I was shaking.  I guess I knew that it might be difficult to watch this episode, but they have handled difficult subjects so well, I found myself anxious to watch how they handled the battle of Culloden.  This morning I find myself glad I did and reflective about what I saw. Because, despite its fantasy wrapping there is truth about real life in Outlander.

I am reflective, in part, because we just buried my dear mother in law yesterday.  Through no fault of her own my mother in law had to struggle to find a new path forward.  Her life and happiness had been compromised by circumstances beyond her control. Mental illness had robbed her of everything she valued; her work, her marriage, her children.  When we knew the moment was near, the hospital sent a pastor to the room.  He gathered us around the bed and asked us to tell him about our mother.  An overwhelming sadness came over me for her difficult life, for her struggle to find a purpose, a grip on her reality through all of her illness and loss. We all struggled to find anything positive to say and it broke my heart.  So, naturally, when I watched Jamie, Rupert, Claire, and Frank trying to deal with the sad circumstances they had been handed, I once again found myself nodding my head in recognition of life’s sometimes sad truths. The lives Jamie, Claire and Frank now face remind me in a very real and emotional way of our mother’s difficult and disappointing life. Sometimes life is unfair.  Sometimes life is cruel.  Sometimes we have no choice but to move forward even when we cannot see a way ahead or even want to go. Outlander’s imitation of life is a wonder.

One of the things I have learned is that this is no longer just Diana Gabaldon’s story, it is also Ron Moore’s.  I know that Ron is a student of human nature and that fact was very evident in this particular episode. In the guise of a Sci-Fi fantasy, Ron Moore wrote a wonderful episode that told us these truths about life, moving on and more.

Viewers of the series will recognize that this is a moment Jamie had longed for, the chance to kill Black Jack Randall.  He had desired nothing that was happening on that battlefield, but this…he wants.  We all want this.  We all want Jamie to get the revenge he deserves, longs for and needs. The look on his face while he waits for Jack to see him is almost triumphant.  But, somewhere in the battle the feeling changes. One of the reviewers this week suggested that this death dance was “homoerotic”.  I’m not sure I agree. It is hard to understand, but in an a way more than physical, Jamie knows more about Jack and Jack knows more about Jamie than perhaps anyone else in either of their lives. That last embrace on the battle field felt more intimate than erotic.  The horrible bond between them is finally broken and yet, it felt fitting that these two men should fall as entwined in death as they were in life.  The irony that, in the end, that very entanglement probably saved Jamie’s life, is not lost on me. 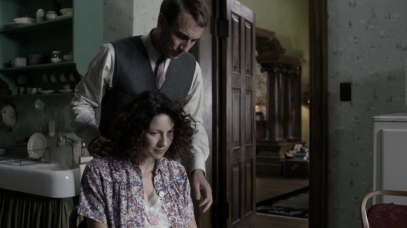 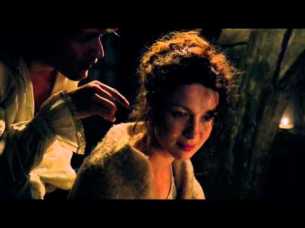 I always admired the fact that in Diana’s Gabaldon’s books there were a lot of “ahas” and connections. Things discussed on the first pages of the series come into play in later books and the same can be said of most things she adds.  It is one of the joys of delving deeper into her stories. I love and continue to love how this show also makes connections with its past episodes.  They give us lots of “aha” visual moments.  The scenes between Frank and Claire reminded me so much of the early moments in Jamie and Claire’s marriage.  Claire is in a relationship that she doesn’t really want, but has agreed to be in out of necessity.  She is trying her best to make the best of a bad situation, but her suppressed feelings keep rising to the surface.  When Jamie tried to touch her intimately at the table after they first make love, she flinched.  She flinched because she still loves Frank and at this moment, his touch feels too intimate, and I would argue that she is already afraid of her feelings for Jamie.

Claire is once again in a relationship she doesn’t really want.  When Frank puts his hand on Claire’s shoulder in the kitchen you can watch her try.  She tolerates this touch because she knows she should, but when he reaches for the stomach that carries Jamie’s child?  She flinches.  Unfortunately, for them both, this time Claire is not conflicted by her feelings.  Her heart is irrevocably Jamie’s. 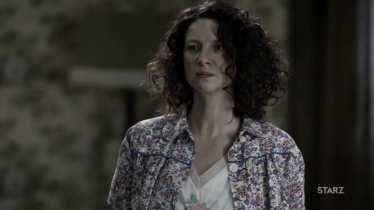 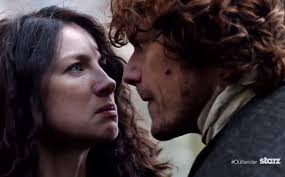 I thought the fight that followed also echoed the fight between Jamie and Claire at the river, the “good fuck” convo, Claire’s chin up in defiance, the moment they both realize that they have perhaps gone too far, and Frank, in his own way, making her realize she was tearing his guts out.  At the river, Claire goes to Jamie and asks his forgiveness.  In Boston, we see Claire begin to go to Frank and then stop.  She cannot bring herself to come all the way back to him, she cannot come back from the past. The show has already done a wonderful job of showing us that sometimes wanting something to be true and working hard to make it happen isn’t enough. 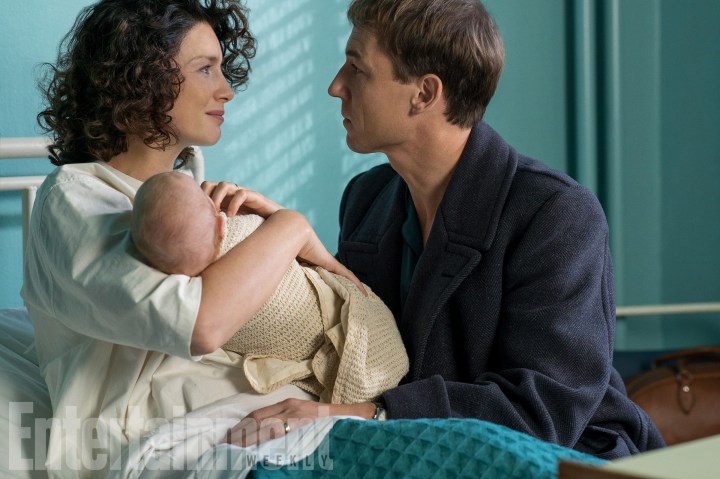 “Where’d she get her red hair?” 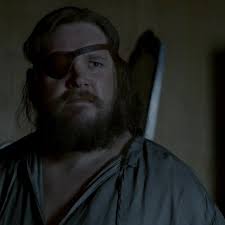 Saying goodbye to Rupert was bittersweet.  In the end, his loyalty to his friends and clan, his pride in the face of his captors, and the dignity in his last moments spoke volumes about himself, the highlanders, and the senseless loss of lives.  When he spoke up, stood straight, and took charge of his last moments as best he could, I was proud.  Who would have thought that Rupert would become the leader Dougal could never quite be.  “I will not go to my grave hating you. God will judge us both and I trust in his mercy.”  The gift he gave Jamie and himself with these words was moving.  May we all choose love and trust in mercy.

Overall, this tale was told with sensitivity and creativity, the performances were stellar, the sets and costumes perfection, the battle joined was gruesome and yet moving, and I was left wondering how I was going to wait until next week.

After watching this episode, I understand a bit more about why actors and show runners might do what they do.  Sometimes, you get a chance to work on a project like Outlander.  Sometimes, in the guise of entertainment, you get to be part of something bigger than yourself.

138 thoughts on “When Art Imitates Life and that is a Wonder…Outlander 3.1”