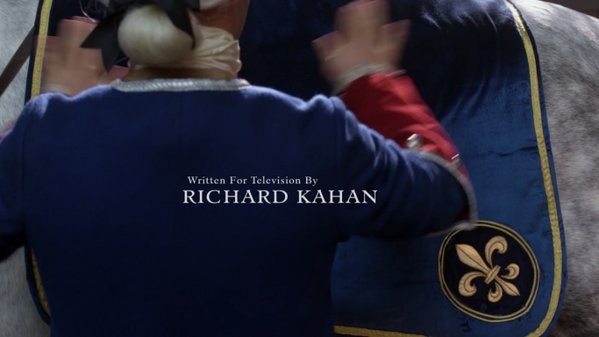 I’m sitting here in the early morning hours after having watched Outlander episode 5 and trying to give words to my impressions.  Although we were treated to The King of France in his caped and emblazoned uniform it was another King that caught my eye. “Untimely Resurrection” ?  Not for me.  James Alexander Malcolm Mackenzie Fraser, King of Men, was resurrected today.  We’ve come full circle.  Today, I saw the Jamie and Claire we have all been waiting for…

This episode was full of wonderful moments of character development (mark me Sandringham is no fool), irony, and subtle foreshadowing.

I was thrilled to see the show open with these quiet moments with Jamie and Claire. Their dialogue with each other was so natural.  There wasn’t any hesitancy, no carefully measured words.  They were totally and completely present with each other.  What ever wall stood between them has been broke down. They were once again two that are one. For me, the scene that most proved their unity was when Claire was finally able to be vulnerable. Her confessing her fears about motherhood to Jamie signaled that she no longer saw him as fragile.  When he was able to offer her reassurance and called her his “brown haired lass” once again?  I tearfully smiled along with Claire.  You got the sense that no matter what else happened they were going to be okay. 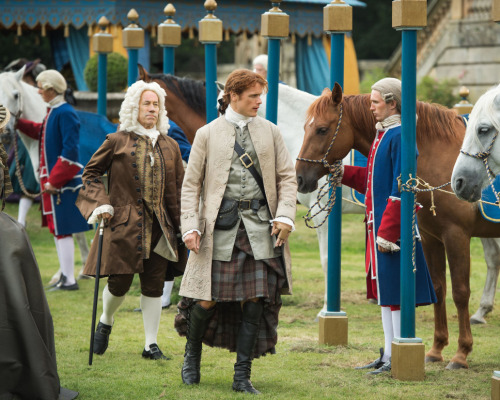 Annaliese was not the only one to recognize that Jamie is no longer a simple impulsive boy, I saw a man today, as well. I saw a Jamie who is rapidly gaining back his sense of self. There is a confidence in his speech and the way he carries himself.  He is able to give reassurance not only to Claire, but to Murtagh because he actually has something to give. He isn’t an empty shell anymore.  Like most of us, he has most certainly been changed by the things he experienced. I think we will always see the shadow of Wentworth on Jamie’s face, but I believe that there is some truth in the old adage that what does not kill us only makes us stronger. There is real power in knowing that you are a survivor, that you can come out the other side of something so inconceivable. It is difficult to imagine that this Jamie could be shaken by anything or anyone…except Claire.  Johnathan Randall was correct in assessing that the only true way to reach Jamie was through his love for Claire.

As Black Jack approached they slowed the camera down… again…dammit…every time they do that I think …crap.  As the camera slows, we know something terrible is coming, something that will change things forever…things will never be the same.

The first thing I want to address is the way Tobias Menzies said Claire’s name. Aside from the fact that Jack feels intimately acquainted enough with them to call them Jamie and Claire, the sick rat bastard, did anyone else hear Frank!?!  I believe I said out loud “That wasn’t Black Jack that was Frank! No wonder she flinches.  How can she possibly not see BJR!”.  The exchange that follows between between Claire and Randall was was the stuff of nightmares.  The irony that it took place in the bright sun in a beautiful garden was brilliant literally and figuratively.  A waking nightmare.

Once again, I am so impressed with the subtle performances. How the frick did they make Claire’s face drain of color? And, the desirous inflection in “Jamie’s here…where?”  I wanted to vomit myself.  I think I could go on forever about how this was filmed and scripted.  The symbolism.  The irony.  They can’t escape him.  Their paths continue to cross.

“Unbelievable. The fates are toying with us now.  Setting our feet on seemingly divergent paths and yet, somehow converging…”

She tries escape.  He blocks her path.  She tries again and he grabs her.  She tells him to let her go, but he won’t.  Will they ever be rid of him?

And then, the King,…despite what has just went down they all still have a role to play. Claire, bless her glass face, struggles to get it in under control and I LOVE that about her! In fact, through out the episode we were treated to Claire showing her feelings on her face for all the world to see should they care to look.  She is such a moral, caring person and none of this sits very well with her, but she pushes down her feelings because the lives of so many hang in the balance.

I loved this scene with the King because well, who didn’t love seeing Jack on his knees?!   I loved that Claire continues to baffle him.  When the King kisses her hand and compliments her BJR just couldn’t keep from looking at her with puzzlement.  He just doesn’t seem to understand the power she wields.  Although I delighted in seeing Jack humiliated while Jamie watches (I loved the little jabs the two men couldn’t help but take at each other), I was struck by the fact that Randall is now the one in the position of begging for love of another.  He is a human after all , despite my doubts.

Claire thinks she has gotten them away from an uncomfortable and potentially dangerous situation.  But, Jamie will not we deterred.  I was watching the exchange between the two men as anxiously as Claire and felt her fear.  What the HELL was that touch on Jamie’s heart about?  And, why the hell didn’t Jamie rip his sadistic hand off his arm?!

And, …best delivered line ever….” He said he owed me a debt (death)” Good Lord, the images that brought to mind. (giving a wink of acknowledgement for that one Richard Kahan)

This scene was everything.  Preseason, I wrote about what scenes in the book I thought had potential to garner awards.  This scene was one of them,

The scene that follows when Jamie realizes what she has done is filled with feelings of betrayal, disbelief, and then outrage when she begs him to promise not to kill Black Jack for her sake.

How could she ask him? How could she not? This scene will ask the viewer the questions “What would you ask of or do for those you love?” and “What are you willing to risk to do the right thing?”  Caitriona Balfe and Sam Heughan will have the chance to show us.

How could she ask him? Caitriona Balfe accurately and movingly portrayed Claire’s struggle.  She and Jamie have finally found each other again.  Despite all that has happened they are sharing their burdens and looking forward to their child, the miracle result of their love for one another.  She knows exactly what happened to Jamie at Wentworth.  She knows what it did to him and has watched him suffer for months.  She knows what news of BJR survival did for Jamie’s recovery.  She has to know that by asking him to spare Black Jack’s life she risks throwing her own happiness and future away.  Most importantly, she WILL be hurting Jamie, so newly come back to her and himself.  A shattering choice and decision yet,….how can she not ask him?  It is only a matter of time. A delay only.  A delay that makes all the difference for another man she loves.  A man who has done nothing, but be the wrong man in the wrong time.  An innocent man.

Like Jamie, Claire is a person of honor.  She also pays her debts.  She owes Frank. She owes her own integrity and the honesty she promised Jamie.  If she doesn’t ask Jamie to wait to exact his revenge, she believes she would be guilty of murder and that would always be between them. Either way she risks a ruined relationship and so,she must act on her conscience’s urging.  Claire is a brave woman worthy of emulation and admiration. She feels the fear and does the right thing anyway.

Jamie’s reaction and Sam’s performance; his disbelief, his anger and outrage, his feelings of betrayal, his struggle with his honor and love of Claire were all there.  My heart broke when I heard the break in his voice and my own eyes filled with his unshed tears. His warrior spirit rises to the challenge once again as his kisses the blade and pledges his oath to Claire once more.

I’m waiting to hear the inevitable complaints, but quite frankly, I thought the episode was perfection.  After having watched it for a third time this morning, I would be really hard pressed to identify anything to complain about. I really could write pages on this episode and all it developed and revealed.  There were departures from the book, but once again I felt they were all in keeping with what was plausible including Claire’s attempts to right things for Frank with Alex and Mary. In for a penny, in for a pound as they say. They have been trying to change the future the whole time they were in France why wouldn’t assuring Frank’s survival be part of that. Her confusion and regret only added to the angst of her later decision with Jamie.

Kudos to Richard Kahan , Douglas McKinnon, and well, just everybody who holds a camera, designed or sews a costume, designs or builds a set, just… everybody.  This is such a wonderful quality production. I can’t believe this was episode five already.  I don’t want to spoil this for myself by thinking of the end of the season, but the weeks are flying by and I know I will soon be without an episode of Outlander to look forward to.  So, I’m storing each precious gem of an episode in my DVR jewel box.  They aren’t my books, but what they are is a… wonder.

97 thoughts on “The return of the King….of Men…my reflection on Outlander episode 2.5”