Thursday Outlander fans will find out if our show and its actors are on the short list for winning a Golden Globe award.  I’m terribly excited about this!

Upon reflection (which I do from time to time), I realized I didn’t know diddly squat about the Golden Globes, but it hadn’t stopped me from being excited!  I mean really, the GOLDEN GLOBE awards, it just sounds important !  I mean they are golden and they’re globes!  Who wouldn’t like that!  Basically, I’m up for any award they want to give Outlander because well…these people! 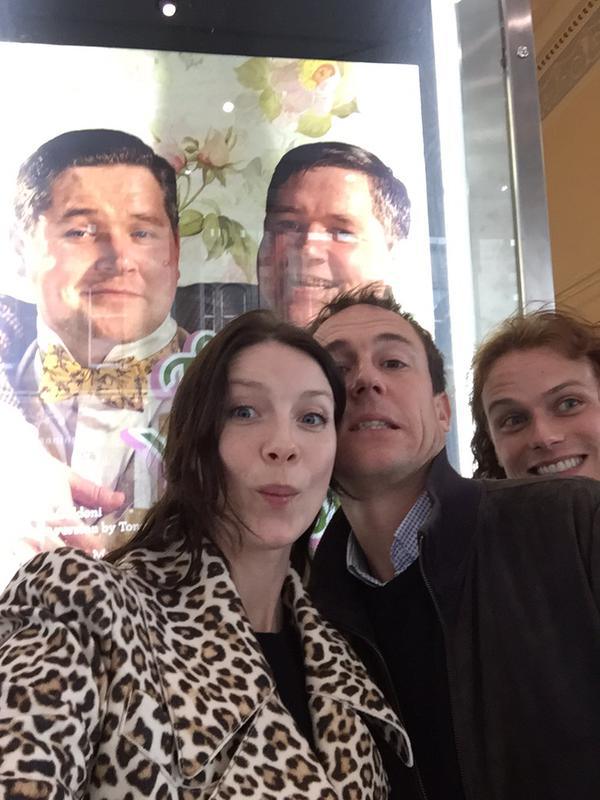 and, oh hell…just everybody…anybody that wrote a line, held a camera, designed a costume or set, made a prosthetic look real, sewed a button, hammered a nail or drove a car (Hi guys!) and helped make this production a reality. It is just lovely.

They have entertained me, made me cry, made me smile and made me proud. However, I’m pretty sure my satisfaction isn’t the criteria Globe folks are using to determine who will win their prestigious award.  So, I did a little reading to make myself a bit more knowledgeable (still stifling a squee though!). I found out that a group of writers got together in 1943  and decided to give an award for excellence in film and television, both domestic and foreign. Currently, there are 93 members of the Hollywood Foreign Press Association (HFPA) that vote on winners in  a variety of categories from best song to best drama.  Because of the subjective nature of their votes there is always speculation awards like this might be as much about politics as they are about talent.  But, controversy and political maneuvering aside (I found out it really does seem to matter whether you are going for supporting actor or call your film a Drama), it is the third most-watched awards show each year and believed to be a serious predictor of who will win an Oscar. The show that wins and the actors, directors, writers, etc. definitely benefit from the notoriety winning the award brings.  More jobs and money for everybody!

I just thought this looked like a pretty satisfied smile <g>.

Outlander is up for best TV Drama series.  A recent article in the Los Angeles Envelope analyzed how and why they think Outlander will get the nod:

Analysis: HFPA voters like to beat the Emmys to the punch by rewarding first-year shows. There’s no shortage of choices this year, but we suspect they might circle back to “Outlander,” the popular time-travel romantic fantasy series that gained momentum during the second half of its initial season.

A recent article by CarterMatt had this to say about about why Tobias Menzies should be considered for best supporting actor.

Tobias Menzies, “Outlander” (Starz) – Probably the most terrifying, hardened, and shocking performance of the year. We’ve said it before, but it takes something astounding to inspire hatred for a character. Black Jack Randall was a character who qualified for that and then some, and in the hands of a lesser actor we’re not sure that his scenes with Sam Heughan would’ve had the same impact. From Menzies’ approach to his delivery, the final episodes of season 1 in particular were so chilling that they will be impossible to forget.

I totally agree.  Tobias’ frightenly good portrayal of Black Jack Randall made us squimishly uncomfortable.  Actors need someone to act against, play off of and I can imagine that Tobias performance did impact how deeply and wonderfully disturbing those scenes involving Black Jack ended up being.  I think Sam Heughan, Jamie, even said Tobias’ portrayal of Jack was “scary”. In those last two episodes of season 1,  I wanted to look away and found I couldn’t.  It was truly emotionally unlike anything I’ve ever seen. I was as staggered by the acting as I was by the visceral story that was unfolding on my screen.

I’m happy to say that although Tobias’ portrayal of Black Jack was perfectly perverse those final episodes were truly and rightfully about Jamie. Sam let us see Jamie thinking and feeling. His ability to emote continues to astound. I felt the tension in his body, the pain and the shame. Although there were wonderful lines spoken, they were “no but weak words” when compared to the story we SAW. There were images on my TV  that night that will not likely be forgotten. Jamie’s absent face as he lay on the pallet reminding BJR of his promise to kill him and his devastation following his orgasm at the hands of his rapist. The prison scenes truly exceeded my expectations and I cannot say enough about the dedication to their craft exhibited by everyone involved. Ground-breaking. It was a brutally honest portrayal of rape and its aftermath.

I’ve read what critics and other’s who have seen the finale said about their reaction to these particular scenes. They were sobbing with a gut wrenching connection to characters on a TV show, something they had never experienced before. I believe them. They were beautifully filmed and acted episodes. 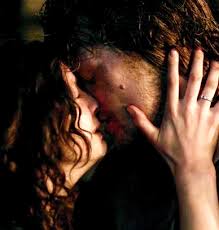 Caitriona Balfe’s performance perfectly portrayed our frustratingly principled Claire.  The series’ success fell heavily upon the shoulders of this actress who had to make us believe this had really happened to her.  She fell through time and had to find a way to survive long enough to find a way back.  Caitriona’s Claire was believable.  She allowed the TV audience to truly care about this character.  We could put ourselves in her place, we could feel her anxiety, fear, and confusion.  How refreshing was it to watch an actress portray a woman who was neither a stereotype nor a sex object, but a woman who knew her own worth and expected to be treated as the capable woman she knew herself to be.  Cait’s performance embodied the strong, pragmatic, smart, and kind woman the book readers fell in love with and as a result, so did the viewers.  She was a kick-ass, brave heroine.  Acting in almost every scene, for 16 episodes, is a long time to maintain a performance.  She only got better.  Her chemistry with Sam Heughan was a joy to behold (that river scene!).

The show its self was ground breaking on so many levels.  They weren’t afraid to go there whether it was showing sex in its innocence and depravity, its joy and its horror or  the challenges of male and female expectations of 200 years ago.  They showed us women who could save the day, be heroines, face the unimaginable, pick themselves up  and still care about the people around them (just like women do everyday). They showed us men with integrity and emotional intelligence.  I think for me that was the most groundbreaking thing Starz and Tallships Production did.  They weren’t afraid to tell a story of people who wrestle with choices and choose kindness, honor, truth and self-sacrifice.

Somewhere, in TV and maybe our real-life culture, the idea of self-sacrifice as being a noble action has fallen away to the need for self-fulfillment at any cost.  I’m happy there is a production on TV that isn’t afraid to tell another kind of story. It’s  wonderfully full of redeeming characters who don’t always have to be right or have their own way.

So, if I had the power, I’d give them all a Golden Globe!  But, instead, I’ll be anxiously waiting to hear that our beloved show got the notice it deserves.