Join 9,387 other followers
Follow My Outlander Blog! on WordPress.com

Here we go again, fighting to get Outlander shown in a country featured in the show!  Season two of Outlander on Starz will take a look at life in Paris in the mid 1700’s.  It will be a visual feast and we want our French friends to be able to join us at the table!   I’m not sure exactly what it takes to convince TV outlets to add a show to their list of programing, but I’m pretty sure Outlander has a little bit of something for everybody! 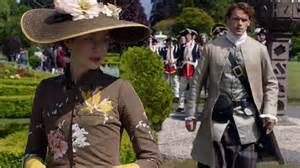 A BRIEF HISTORY LESSON FOR THE UNINITIATED

The news that Outlander was being made into a sixteen episode TV series for Starz was very welcome news to fans of Diana Gabaldon.  Ms.Gabaldon’s eight book series based on the adventures of one time travelling WW II nurse, Claire Randall, has been read and reread for over twenty years. The rights to turn the first book into a movie have been sold for just about as long and many script writers have attempted to cram an 800 page book into a two hour movie. Not possible…or desired by most fans.  So, when the news of the series came, coupled with the knowledge that producer Ron Moore, of Battlestar Galactica fame, would be at the helm, fans rejoiced! (and it’s rumored that angels wept!) Finally, maybe the story would be told and fans would get to see their beloved main characters, Jamie and Claire, come to life! And, joy of joys, they are almost done with the second book! Please let our French fans watch too!

Critics and entertainment journalists were doubtful that this book to TV adaptation would flourish due to what was perceived as a female-centric audience. The media seemed to believe that the show would only appeal to bored middle-age housewives and was a bodice-ripping romance.  Now that the series has aired 16 episodes the ranks of media/critics seem to have changed their minds and are now singing the praises of Outlander.  Fans of the books are thrilled that the show is being so well received and maybe they are feeling a bit smug.  After all, they’ve always known it was a great story! And really, what’s not to like? 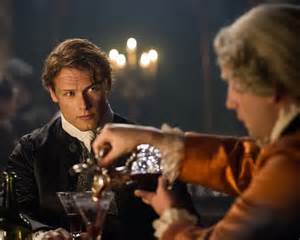 WHAT ABOUT THE ROMANCE?

The tale has been labeled as “genre bending” and for a variety of good reasons.  Fans of the book can assure new viewers that the relationship at the center of this tale goes far beyond the  traditional romance genre where the story is about falling in love. For instance, the traditional romance is stood on its ear with a woman in the role of the experienced lover and her new husband the virgin. The time travel element adds an additional twist.  If you are two hundred years away from your husband who hasn’t been born yet is it cheating if you marry someone else? Claire loves two men and this creates an intriguing problem for her already full plate of problematic situations. Season 2 will give us a passionately committed couple and new issues and problems for Claire and Jamie to face. And, they don’t get any easier!  They’ll just be trying to change history.

Starz has done a wonderful job of portraying the sexual relationship between the two main characters.  In fact, there are multiple articles out there written by critics, the media and those interested in the portrayal of sex on T.V. that look at how Outlander Starz writers, directors and producers handled this material.  They found it nothing short of revolutionary.

Yes, but …gosh …how do I explain this?  The sci-fi element of this story is there. but more as a vehicle to get the heroine of the story into the situation she now finds herself.  She lands 200 years in the past after touching a standing stone. The mystery of standing stones is just that a mystery.  We really don’t know what they are or why they are there.  The old Celtic stories of people being stolen over by the wee folk might actually be based on an interesting theory of time-travel.  What would you do if you were Claire? At the end of season one because of love of her highlander Jamie,  she has decided to stay, now, how does she deal with her knowledge of the future? The time-travel element is a great backdrop. It is always there….waiting.

Fans of Outlander executive producer Ron Moore were at first puzzled and some downright shocked that he took on this material.  The series was being touted in the media as a “romance” and that seemed very far from Ron’s usual projects. Ron simply explained in a press conference that he had read the books and found them to be a “Ripping good yarn”.   This is a story full of adventure, history, surprises and characters with layers and we love Ron for recognizing that it needed to be told in a series. We also love him for talking with the author and staying true to the spirit of the books.  If you like battles, swordplay, chases, political intrigue (ESPECIALLY AT THE FRENCH COURT!), plot twists, hot sex, tender love stories, strong characters, and really nasty villans then you might want to give Outlander a shot!