Join 9,387 other followers
Follow My Outlander Blog! on WordPress.com

I was sitting down with my Sunday morning cuppa and opened my Twitter feed ( my usual morning coffee routine) and checked out what Diana Gabaldon was talking about this morning (usually pretty entertaining or informative cuz she’s pretty witty and smart).  This morning someone who recently found Outlander was concerned she might be too old to be a fangirl. Loved Diana’s response. 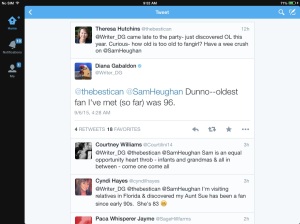 This started some speculation as to why Sam Heughan, our Jamie, is so appealing.  So, now my curiosity is piqued and my coffee is getting cold because I’m theorizing ( is that a word? ).  Why, I asked myself, is he so appealing?

LET’S LOOK AT THE EVIDENCE SHALL WE?

Sam is definitely a beautiful man.

Some say it is the smile.

Some say it’s the voice.

Some say the way he bites his lip. 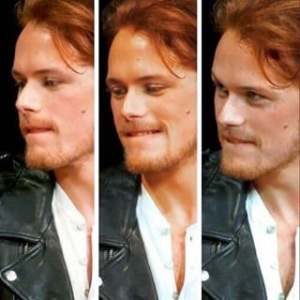 Some say it’s the twinkle in his eye.

Some say it is his bum. 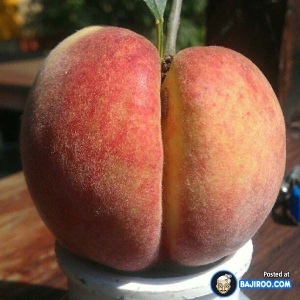 ( you thought I was gonna show a pic didn’t you?) Haha made you look!

The fact that he has big shoulders, big hands, he’s tall, and has that little scar, and….I’ll stop now….is it me or is it getting hot in here?

Here’s the thing.  There are lots of beautiful men in film. So, even though he is pretty to look at, I don’t think it’s his looks alone that make him so appealing.

Obviously, I’ve never had the pleasure of meeting Sam or spent time with him, so anything I know about his personality must be gleaned from trusted sources like Cait, Graham, Diana, etc..  Here are some adjectives and phrases I’ve heard in regards to Sam.

“He is a genuinely nice person”

“He has a great sense of humor”

“He is such a gentleman”

“What a great guy”

“He has a quick wit”

I love his teasing tweets with Diana, the Outlander driving guys, his co stars, and his fans.

He gives of his time and uses his popularity for good.  I’ll bet his momma is proud!  I would be! 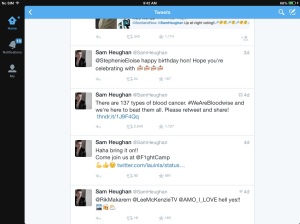 I would be remiss if I didn’t acknowledge the fact that a big part of his appeal to Outlander fans is the fact that he has so embodied our Jamie!  Sigh….  I have gone from “who are they ever going to get to play our Jamie?” To “he is Jamie”.  My appreciation for his acting skills continues to grow as I watch (and re-re-watch Season1 Episodes)

He’s Adorkable.  Anybody remember when he shared this video?  Or posted this pic? Yep….Adorkable.  I love Adorkable.

Despite, these valid reasons Sam appeals to me (cuz I might be old, but I ain’t dead) and evidently a lot of other women of all ages, there is just some element of intangiblity  isn’t there?  For whatever reason, when I hear him speak, he makes me smile, he makes me sigh, and he makes me proud to be his “fangirl”.